It's The Little Things In Life... (with photos)

But I'm not. I somehow woke up with a queasy stomach, and a headache despite not drinking. Perhaps it's the ghost of my younger days, when I would drink until I could barely see and then wake up fresh as a daisy the next morning, coming back to haunt me. I also managed to hyperextend my right knee while making the bed last night... don't ask me how, I'm just that freeking graceful. Despite all this, I plan on going for a very nice walk today. I still don't have my treadmill for my exercise and I'm behind on my goals. So walking it is!
Thankfully we have some beautiful biking trails around this city, so I'm going to walk along those, and probably chase some frogs, or lizards.

Because I do that sort of crap.

So I hope everyone had a fantastic weekend, no matter if you celebrate Easter, Passover or just the awesomeness of having a bloody long weekend. I'm not religious in any real way, but Sunday was my birthday, so we celebrated! WOO!
My mother-in-law (who is religious) decided to make twice the food apparently, so we could have two celebrations at once. There was enough to feed a squad of US Marines.. no joke. There was also two cakes, and a pie at the end of it. Shockingly, I didn't gain weight that day. Neither did I lose any, but I considered it a minor miracle anyway. 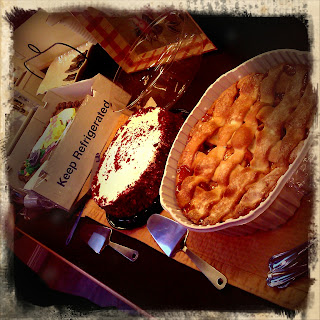 My son, who flew in from his dad's in North Carolina for Spring Break, ate till he popped, and then fell into a food coma on the sofa, while the oldies chatted over our pieces of sugary goodness. (I had the red velvet cake YUM) He's gotten pretty damned tall, this child of mine, and is becoming an adult before my eyes. Makes me feel old, and sad. I want to hug him back to being a little boy again. 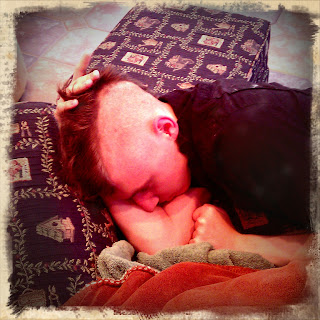 It's not the most flattering photo, sorry. But you can see the shaved head really well. I can hardly argue about the hair, by the way, since when I was his age I shaved my head in the exact same manner. So I decided to handle it the same way my mother did.
"It's your head. You have to live with it until it grows out."
It takes all the fun out of rebellion when your parents don't care. ;) I had taken it a step further, and dyed it colors, but he declined when I offered to make his hair blue and green to match Easter eggs. Boy, I sure know how to ruin his fun. *grins*

Also part of the Easter fun was the brand new puppy that my mother-in-law got. Her name is Daisy, and she's a pure-bred Golden Retriever. I personally wouldn't ever pay for a pure-bred, because not only have her dogs cost her arms and legs, and most of her internal organs to start with, they also have more health issues than any mutt I have ever owned. They are very well loved dogs though, and she can afford the medical costs, while my husband and I cannot. As a matter of fact, we've only had to take our "pound kitties" to the vet once for something outside of their usual wellness check ups for their shots. (I'll post about that next time though, as it's a pretty funny story.)
Now, since everyone loves puppy pictures, and Daisy is without a doubt the most "AWWW" inducing puppy I have ever met... Without further ado: Daisy.

Yesterday  I made a list of stuff to take care of around the house for my annual spring cleaning marathon, since for the first time since ...well, for the first time in my memory actually, I have the whole week off at home. I took the week off to be with my boy, so I figured we could use it to clean as well as spend time together. (because I'm REALLY not good with idle time. Blogging helps me with this, I need shit to do.)
One of the things on my list was to wash all my linens, and then fold and put them away again. The Winter sheets sets get wrapped in plastic, and stored with a dryer sheet or two, and the Summer sheets get pulled out of the same plastics, washed and placed on the beds, or put on the linen shelf for later. Now I know most people find folding the fitted sheets difficult, and I did too until I developed my technique for folding. I thought that I would help everyone by sharing this great way to fold that I developed myself. If it helps you out, please let me know in the comments! 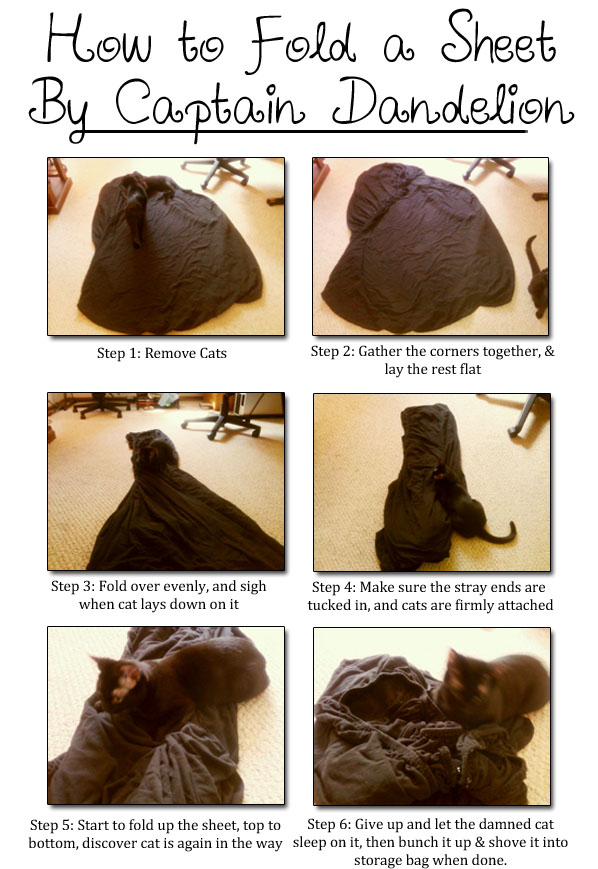 That's all there is to it!

I'm sure I had more to talk about, but now all I can think about is that it's nearly 1pm, and I haven't started my walk yet, or had anything to eat. So until next time, when we'll discuss my cat's vet visit, and perhaps post photos from the walk.

Email ThisBlogThis!Share to TwitterShare to FacebookShare to Pinterest
Labels: have I mentioned my cats?, let's all laugh, photography, sharing the weird